Recently I completed the circle of life in seeing bribes change hands and I want to pay homage to the “system”.

For the sake of legality and sanity, read this like a story. If you are a person with any kind of office or getting offended by any negative coverage about anything – treat the content below as pure fiction and the ramblings of a mad man. I advise you to stop and go back to your life.

I am in India but am sure many of the developing countries have a degree of what you see here. I am talking about a bribe system that stresses on the receiver rewarding the provider for performing a service, even when providing such a service is part of the duties of the provider and being compensated for.

I head a person being asked for five times the stipulated amount towards performing the last rites of a family member. I did not blink at the officials asking for “something” for the boys. I had forgotten to show emotions, it was all but natural.

And, just like that I saw the bribe do a full cicle.

Not to talk about all other mundane things. Cleaning the street and clearing out garbage. Cleaning the clogged pipes/ drains on the street, fixing street lights, cutting branches that is dangerously close to overhead power-lines, and so on.

I am left pitying for the people in deep red states in the corruption perception index. 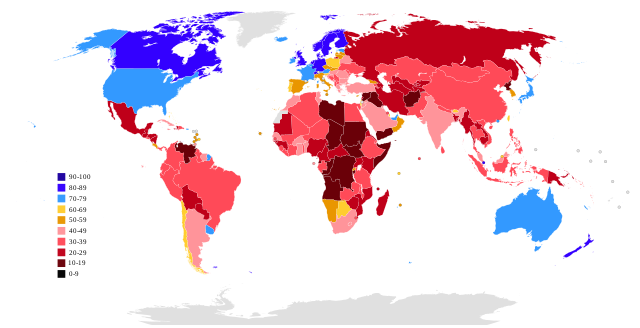 If this is the state of affairs in a lighter shade, is there hope at all?

There is no consequence

I don’t see myself or anyone flinch when a politician or an official of any authority takes a bribe – even in cheques. We don’t get shocked by unaccounted money buried in toilets, buried in their lands, in water pipes, and even in walls/compounds. I don’t see any adverse reaction to powerful people spending obscene amounts of money for parties and festivals.

I saw people having a good laugh about it all when RTOs got occasionally raided by anti-corruption units and money was thrown out of windows. Or, when officials literally ate the money so that they were not caught with the proof of the act.

There is little or no consequence of taking bribes – as long as the power sides with the person. People have been dropped from investigation for no reason, people are investigated later for no apparent reason, and criminals and hapless foot-soldiers are secretly interviewed for future leverage.

We are to blame

I blame myself and all of us in nurturing the system of bribes. It is no one else’s fault. Unless we change our attitude towards the bribery system and the people who encourage / thrive in such a system, we get what we deserve in the form of leaders and the living conditions within the country.

We need to be cognizant to the effects of asking for /receiving bribes.

We have to treat the whole process for what it is - the profit of a few from mass suffering of the majority.

We have to collectively wake up.