One of the more recent articles that had a deep impact on me was from Martin Manley. And, that is not because I am remotely interested in sports.

Mr. Manley, all of 60, founder-editor of sportsinreview.com, and a man with a seemingly not-so-bad life decided to end his life at exactly 60 years. Nothing really new in that, there are thousands or even lakhs committing suicide hurting someone near and dear, and probably causing less than a scratch outside their sphere of influence. But, the way he committed to the cause of taking his own life puts any compulsive planner to shame. The meticulous planning that went into the thoughts that compelled him to take action, the place chosen to commit the act, the way message was relayed back to the fans, detractors and everyone in between, and the comprehensive way he planned to end everything is certainly going to haunt me for the rest of my life.

Being a journalist he may not have found really difficult to put more than a few words to good use, but the words he decided to put forth in a blog are just beautiful. They show a (presumably) simple, caring, loving man who went from being really alive to being dead in a ‘nicely’ planned fashion. All this in the last attempt to being in control of his own life. 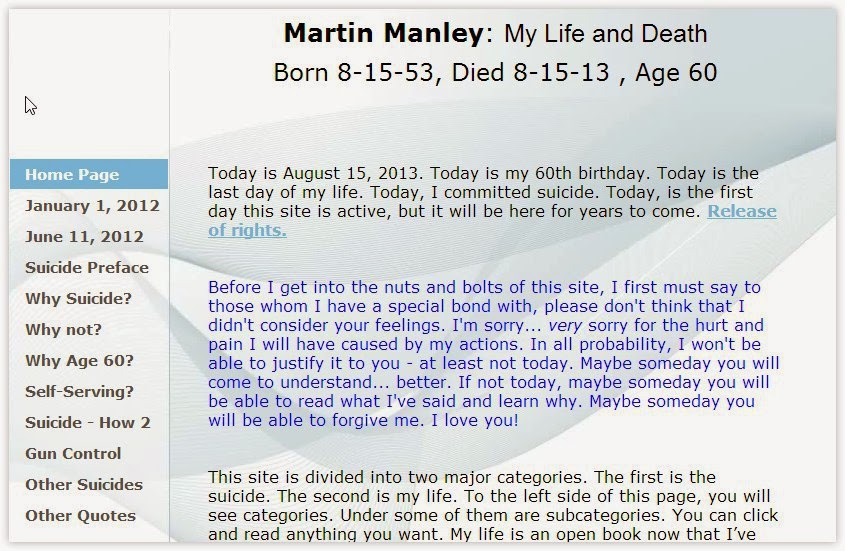 Religion is going to deplore such an act. I certainly cannot condone what he chose to do. But at the same time, I appreciate his side of the story.

Yahoo took down his blog martinmanleylifeanddeath.com, but this is internet we are talking about. So, we have two mirrors hosting the same content for at least sometime in the near future.